Catch Your Scream Campaign has as a proposal potentialize the producers on the partnership amplification to rise the volue of resources, being in Real or complementary coins, that make viable and strengthen the structure of Grito Rock editions.

Build Your Coin Campaign comes to encourage that the collectives and other producing organizations create their own complementary coin and contribute to the strengthening of solidarity economy. 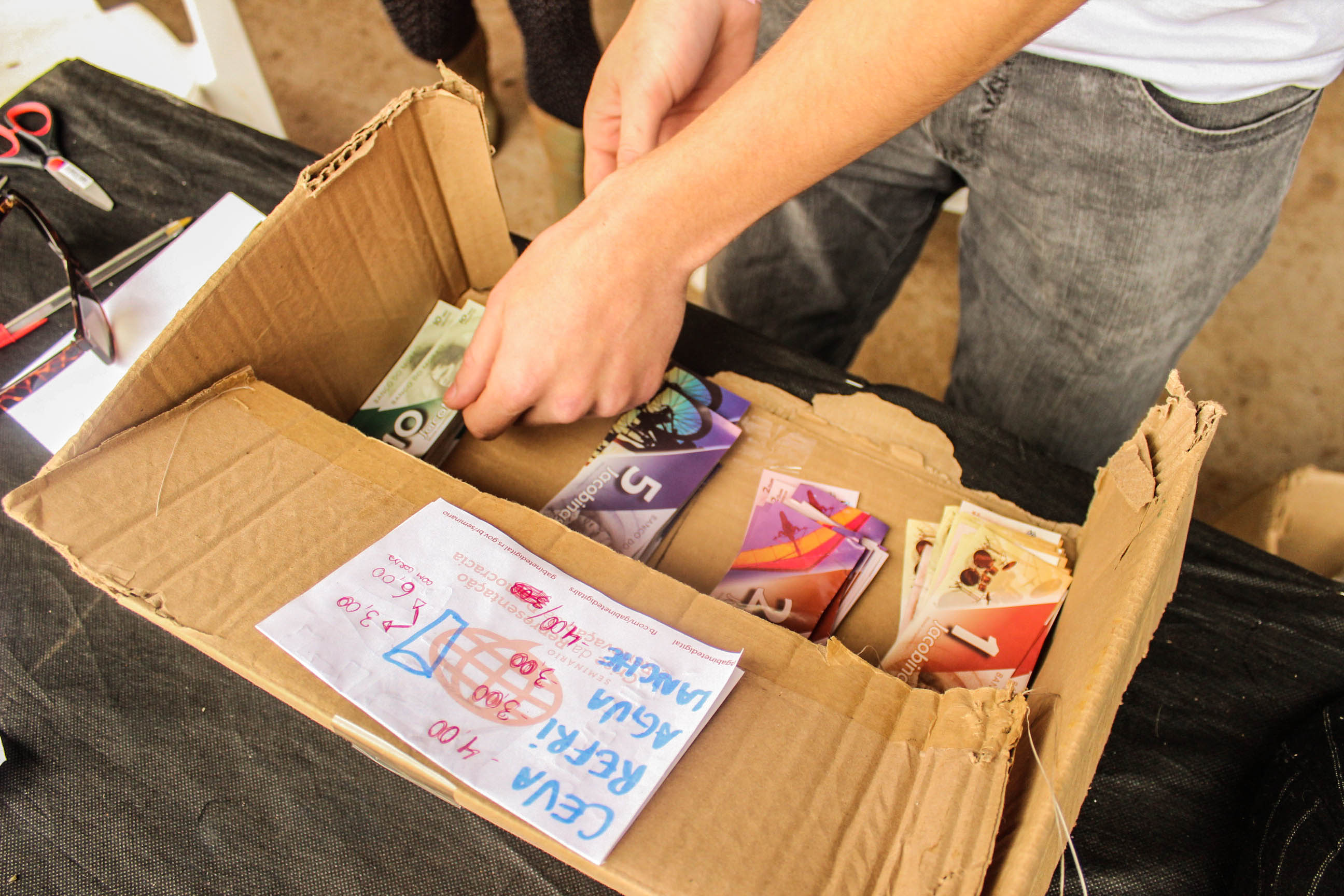 – What is solidarity economy?
– What is social coin?
– How it works
– To use on festivals or temporary events – switch club
– To use on day-by-day in a permanent way – collective enterprise

WHAT IS SOLIDARITY ECONOMY?

Solidarity economy a way of production, use and wealth distribution (economy) centered on the valuing of the human being – and not the capital – on the basis of associactive and cooperative, turned to the production, use and commercialization of goods and services, in a self-managed way, with its purpose the life amplified reproduction. Therefore, on this economy, the work transforms in a way of human liberation inside a process of economy democratization, creating an alternative to the alienating and salaried dimension of capitalist work relations.

WHAT IS SOCIAL COIN?

The social coin rises on the solidarity economy as an alternative to barter, and possess its own characteristics. The social coin is considered a local development instrument, destined to benefit the work market of groups that participates of the localities economy. Its use is restricted, and its circulation benefits the resources redistribution on the won community sphere. The increase of social coins quantity responds to the performed transactions increase by the local economy participants. Its creation is inspired by the concepts of articulation solidarity economy and economy exchange, on the production and commercialization of products that goes beyond the capitalist logic, by benefiting the local community and bringing development. The social coin, by its restricted circulation, helps to decrease the centralizing power of globalized capitalist economy, and promotes the social inclusion.

The social coin is not a parallel system, but complementary to the economy. It is produced, distributed and controlled by its users. For that, its value is not on its own, but on the work that can make to produce goods, services, knowledges. Its coin doesn’t have value until is starts to change the product by product, the service by service, the product by service or the service by product. The coin starts to fit as a mediator of this exchanges. It’s different also because you’re not connected to any interest rate, that’s why it doesn’t interest no one to keep it, but exchange ot continually by goods and services that come to respond our needs.

TO USE ON FESTIVALS OR TEMPORARY EVENTS – EXCHANGE CLUB

Prioritize the use of solidarity coin, circulating only during a festival being still a stimulus and incentive for the collective to keep its foment parting from this initial use.

The coin may replace the tickets (chips) of food, accommodation, drinks between other event products being ballasted by real itself that the producer will use to these items payment.

Another pretty effective measure is to negotiate a percentage or full value of the space location with the businessmen of the possible event fair. On this case the ballast may be on card 100%, having the businessman to pay to the producer the space with that same coin that it has received. If the businessman didn’t got the card, he pays in Real.

It means a complementary coin affirmative politic as sustainability tool and exchange potentializer among the people present.

Therefore the coin must be distributed among the guests in a value equivalent to the expenses the producer has negotiated on real and/or card with the suppliers.

TO HAVE THE COIN FUNCTIONING ON THESE EXCHANGE CLUBS IT MEANS TO:

Negotiate with the accommodation, feeding  or any other product suppliers that may receive the Festival temporary coin, introducing the coin to be used. At the end of the event it’s enough to exchange the collected cards by the value to be paid. In case the negotiation be the card exchange itself (without real envolvido), just open a supplier statementcardand and charge on the extent that a service exchange is completed.

Create and print an X quantity of coins based on the suppliers negotiated products ballast. It also must use the FdE Card stamp on the coin to be collected by FdE Media.